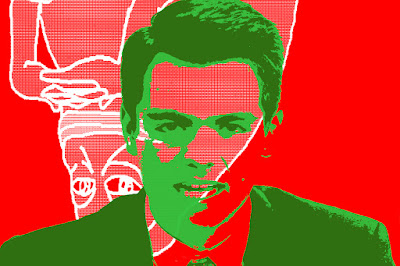 Young fascists from the University of Maine to San Diego State signed a resolution at the end of March calling for President Trump to “pass an indefinite moratorium on all immigration to the United States.” Seven college Republican groups from Maine, Arizona, and California initially signed on.

The statement, viewable in full at the bottom of the story, was originally drafted by the University of Maine Real College Republicans. It cites the “Wuhan Virus,” known by non-racists as the disease COVID-19  or the novel Coronavirus, as their latest excuse for wanting draconian immigration policy. Specific groups they want expelled are foreign students, tech industry workers with H1-B visas and DACA recipients who by definition have lived in the United States for most of their lives. They also call for a punitive tax on money that “alien workers” send abroad. And, of course, they want the border wall finished.

The demands aren’t really about practical containment of the virus. They’re the same demands fascists in the United States have made for decades. For example, the neo-Nazi National Socialist Movement’s “25 points” included a demand that “[a]ll non-White immigration must be prevented” and that all non-Whites must be expelled.

Peter Brimelow, the founder of the white nationalist VDARE magazine hob-knobs with conservative outlets like The Daily Caller, publishes Ann Coulter, and had a close rapport with White House advisor Steven Miller. Brimelow and VDARE writers often advocate for an immigration moratorium. The SPLC writes that VDARE “has produced ﻿a deluge of propaganda related to the pandemic,” most of it urging Trump to further restrict immigration. The racism in the articles is blatant. One article from February is titled “Do You Know All Coronavirus Victims Appear To Be Chinese? Thought Not!”

But VDARE isn’t the main engine of this insurgent college fascist movement–Nick Fuentes and his “America First”/”Groyper” movement is. Fuentes, a Unite the Right attendee and Holocaust denier, is the main figure behind the coalition that’s succeeded the alt-right.

To understand the Groypers, LCRW spoke to Devin Burghart of the Institute for Research and Education on Human Rights (IREHR,) which released a report in February called From Alt-Right to Groyper: White Nationalists Rebrand for 2020 and Beyond.

"[W]e looked at the ‘Groypers’ as a political force, and as a marketing and organizing strategy,” Burghart told LCRW. “Like the ‘alt-right’ before it, the Groyper mobilization is not a new social movement, but rather a flashpoint in the latest mainstreaming strategy deployed by white nationalists.”

But their most famous supporter is Michelle Malkin, a one-time darling of the more mainstream and corporate-friendly conservative movement who authored a book-length defense of interning Japanese-Americans. [Jesus Christ lol] Malkin lost her gig as a Young Americans For Freedom speaker after publicly backing Fuentes and his “Groyper Army.” She’s since doubled down. Incidentally, Malkin was supposed to speak at the University of Maine College Republicans’ invitation in January but the venue cancelled.

Malkin was thrilled with the resolution.


“AMEN AMEN AMEN: New alliance of nationalist College Republicans calls for immediate immigration moratorium to protect safety, security & economic well-being of #AmericaFirst! Do @yaf & @TPUSA (and their donors) support or oppose this common-sense resolution?” she said in a post sharing the resolution on Twitter.

“We will no longer surrender this country or its people to the false song of globalism,” the Arizona State University College Republicans said on Twitter, referencing the anti-Semitic dogwhistle.

“The immigration moratorium resolution is the clearest manifestation of the Groypers’ strategy to date,” Burghart wrote to LCRW, continuing, “Nativism and xenophobia are central to the Groyper’s white nationalist rebranding efforts.”

Burghart and IREHR found that Fuentes’s crowd is employing two main strategies. The first is “driving a wedge between the Trump camp” and billionaire-funded conservative campus groups like Turning Point USA and Young Americans for Freedom.

“If the ‘alt-right’ strategy most associated with Richard Spencer sought to pull disaffected reactionaries and misogynists outside the Republican Party into the white nationalist fold,” Burghart said, “the ‘Groyper War’ is aimed at pressing Donald Trump and Trump-backing conservatives to adopt the core issues and political framings of white nationalists in the lead-up to the 2020 election and beyond.”

Fuentes first sent his Groypers out to billionaire and foundation-backed conservative speaking events last Fall Semester. Fuentes’ goal was to challenge “Conservative Inc” talking heads like Charlie Kirk and Ben Shapiro on the issues that really matter: Anti-semitic dogwhistle gotcha questions about the Israeli military’s sinking of the U.S.S. Liberty in 1967 and calls for endorsing bigoted policy like exclusionary immigration laws.

The Groypers managed to disrupt events with Donald Trump Jr., Charlie Kirk and Fox News commentator Kimberly Guilfoyle and, as LCRW covered in detail, Shapiro spent virtually all of a speech at Stanford trying to differentiate his own bigotry from the alt-right’s/the Groypers’ and thereby disavow them.

The IREHR identified the Groypers’ second strategy as entryism, which, Burghart explains, is “gaining a place in more mainstream organizations by moderating one’s appearance and expressed values in order to further movement goals.” While college Republican clubs are nothing new, Fuentes and the Groypers latched on to a population of ambitious young right-wingers across the country and his movement is trying to establish itself on campuses.

“This marks the emergence of a network of groups willing to push Groyper themes on campus, attacking both ‘SJWs’ and other college Republicans who disagree about nativism,” Burghart told LCRW.

One of the most influential groups to join the Groypers are the Berkeley College Republicans (BCR.) BCR don’t explicitly brand themselves as “America First” but have a long history of aligning with Fuentes’s peers and predecessors. BCR has well-documented connections with fascists. Current president Matt Ronnau and former Vice-President Naweed Tahmas were interviewed by Identity Evropa founder Nathan Damigo for the white nationalist outlet Red Ice TV on inauguration day 2017. Then-president Troy Worden invited Milo Yiannopoulos, the Gamergate harassment king-turned Breitbart editor who wrote admiringly about the alt-right to present on campus a month later. Antifascists staged a violent shutdown of Yiannopoulos’s event, breaking windows at UC Berkeley’s Amazon store, punching and pepper-spraying people who wanted to attend Yiannopoulos’s speech. I remember watching them set a police generator on fire.

In response, the far-right began a year of staging rallies in Berkeley, one of which was used by Damigo and other white nationalists as a testing-ground for what would become the deadly Unite the Right rally that August. During Fall semester that year, Tahmas and other BCR members coordinated with local far-right activists including the Proud Boys for Yiannopoulos’s fizzled return to Berkeley. BCR members even passed out t-shirts that said “Nuke Mecca” and “Lesbians aren’t real.” Worden, Tahmas and other BCR members posed with Martin Sellner, founder of the neo-Nazi group Génération Identitaire, which received money from the Christchurch shooter. They also palled around with Kyle Chapman, founder of the now-defunct militia arm of the Proud Boys, the Fraternal Order of Alt-Knights. Worden also gushed about Génération Identitaire at The Liberty Conservative, a far-right website he was a contributor at. Coincidentally, neo-Nazi James Allsup, who used to host a podcast with Nick Fuentes, was also a contributor at The Liberty Conservative.

“There is good reason to believe that the Groypers are attempting to take advantage of the space afforded by Donald Trump’s framing of his own presidency and administration, dating back to his 2016 electoral campaign,” Burghart said. Trump ran an explicitly nativist campaign, famously calling for a massive border wall between the U.S. and Mexico and repeatedly claimed Mexico was sending rapists and murderers across the border. He also called for a “total and complete shutdown” of Muslims entering the United States.

“Nativism and xenophobia are issues that have a) already reached the mainstream, particularly thanks to Trump and b) where their white nationalist positions find the most support,” Burghart said. “They don't have to go through all sorts of ideological contortions to make their message fit the moment.”

Burghart said that “The Groyper message of ‘Non-white immigrants bad. Expel them. Keep them all out. Protect the core white identity of the nation’ is in lock-step with” the broader pro-Trump crowd.

Groypers have gone well beyond being just “pro-Trump.” Matt Ronnau of the Berkeley College Republicans is the CFCR’s president presumably until he graduates at the end of this semester. Ronnau himself followed VDARE on Twitter until some time after an antifascist group called Berkeley Collective Safety called him out for it in January. Ronnau retweets Groyper thought leaders like Malkin and Scott Greer regularly and invited VDARE columnist Ann Coulter to speak on campus last November. If Ronnau is not personally a white nationalist, he is at least someone who spent years as part of a group of BCR members that fraternized with right-wing extremists and white nationalists and openly sympathizes with their goals. And he’s ending his last semester at Berkeley as the head of the premiere college Republican organization in the most populous state in the country.

Jaden McNeil is not only the president of Kansas State University’s America First Students but is a minor thought leader in the Groyper movement.

From Alt-Right to Groyper notes that “Though McNeil lacks the same lengthy paper-trail of explicit white nationalism as that of Fuentes or Casey, he has already signaled his affinity with such ideas.” The report also notes that McNeil involved himself with four Unite the Right attendees: Fuentes, Tim Gionet aka Baked Alaska, white nationalist propagandist Faith Goldy and Patrick Casey of Identity Evropa. Identity Evropa’s telegram channel even listed McNeil’s telegram channel as a resource for a time.

But the point of being a college Republican is to network and move on to a career in right wing politics. On this end, the “America First” crowd have already produced a Senate candidate: Lauren Witzke in Delaware.

“#AmericaFirst College Students are fighting for a chance at a better future. Great work, guys.” Witzke tweeted in response to the resolution.

“Immigration has been and will continue to be, a defining issue for the ‘Zoomer’ generation. The issue is less about the particulars of policy, but more about defining who we are as a nation in the 21st century,” Burghart told LCRW.

“Groypers are definitely gaining ground in the college Republican scene. They’ve made those gains by relentlessly attacking ‘establishment’ conservatives (what they call ‘Conservative Inc.’), and recruiting amongst the disenchanted ranks of establishment conservative groups like Turning Point USA,” he said.

“In 2020, the Groypers also reached a significant milestone when they moved from online army to building a real-life network,” Burghart said, concluding, “The Groypers represent a growing threat, and it will require creative new approaches to defeat them.” 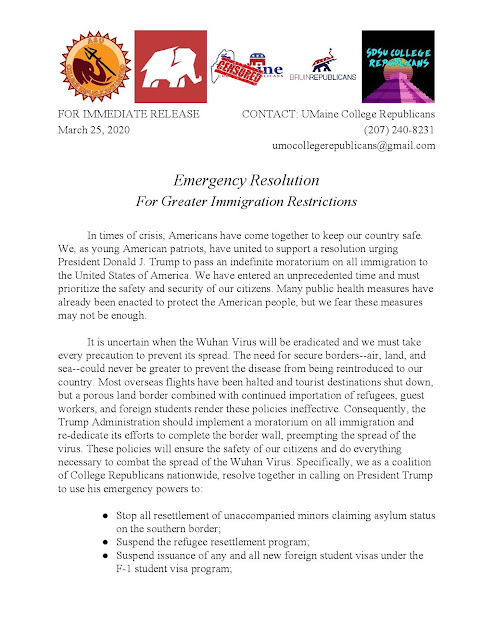 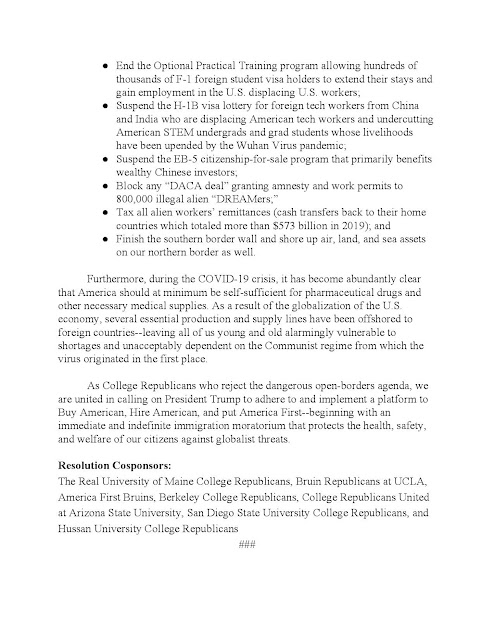