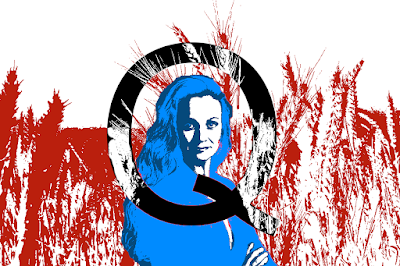 4/27/20 7:12 AM: A quote attributed to Patriot Front founder Thomas Rousseau was removed because of doubts as to the authenticity of the Twitter account it came from.
4/27/20 9:54pm: This article was updated to include a statement from Symbiosis PDX and more information on Amber Krabach's participation in a far-right rally in January this year.

“Hey @TheJusticeDept, my grocery store has been out of flour for a month...are people hoarding it?? Why are antifa/communist groups giving away 3k pounds of it suddenly? @FBI @FBIPortland,” Amber Krabach wrote on Twitter Sunday.

Krabach was quote-tweeting Symbiosis PDX, a Portland-based mutual aid organization. Instead of just seeking donations and doing charity work, mutual aid groups seek to build networks in their communities that support each other independent of government and corporate power. They often use the slogan “Solidarity, not charity.”

Symbiosis claimed they received 3,000 pounds of flour and other grains from Milwaukie, Oregon-based Bob’s Red Mills. Milwaukie’s just south of Portland on the east side of the Willamette. Since the COVID-19 crisis began, Sundays, Tuesdays and Thursdays Symbiosis has been taking in and distributing supplies at their mutual aid hub in the Social Justice Action Center in Portland.

But Krabach, who lives just east of Seattle in Washington’s 45th district where she’s running for State Representative, spent the next several tweets drafting a conspiracy for her followers about Symbiosis.

“Report is that Bob’s Red Mill is nearby and supplying the flour. I would love it if @BobsRedMill could comment on this. Would be great to have their side of the story. Perhaps they could explain why grocery stores are completely out of flour, but they have 3k pounds to donate,” she tweeted.

Grocery store shelves aren’t out of flour because of actual food shortages. Instead, a combination of panic-buying and closures of schools, restaurants and retail stores because of COVID-19 mean distribution systems are disrupted. In Symbiosis PDX’s case, they cut out the middleman and went straight to the miller to get flour for their community. But Krabach saw it as something sinister and conspiratorial. That’s because she believes in QAnon.

QAnon is a conspiracy theory premised on pseudo-messianic worship of Donald Trump. QAnon believers follow “Q,” an anonymous poster on online message boards 4chan and 8chan, who claims to be a high-level government official leaking secret information about Trump and the military’s heroic battle against the “deep state.” Q prophesies a coming “storm” of mass arrests, military tribunals and executions of all of Trump’s enemies. QAnon believers think media, government and corporate leaders are part of a shadowy, Satanic cabal that ritualistically molests and sacrifices children. Aside from these central tenets, QAnon often incorporate subjects like aliens, evangelical Christianity, and anti-vaccine beliefs into their beliefs.

QAnon has motivated acts of murder and terror. One QAnon believer murdered his brother last year with a sword because he believed he was a lizard-person. Another killed a mob boss. Yet another had a standoff with law enforcement on the Hoover Dam after he blocked the road with an armored vehicle. One prominent QAnon follower, actor Isaac Kappie, died by suicide and mentioned failing the “Q” movement in his suicide note. Last year, the FBI’s Phoenix field office released a memo stating conspiracy-driven extremism is a new front for domestic terror threats.

Krabach ran for Representative in Washington’s 45th district and lost against Larry Springer (D) in 2018. She got a little under a third of the vote. It’s unclear when she became a QAnon follower. Her earliest post about it was last December. LCRW counted 17 tweets promoting QAnon by Krabach, most recently on April 16th. A tweetstats.com analysis of her account shows she’s used #QAnon five times, #wwg1wga–short for the QAnon slogan “Where we go one, we go all,” four times.

“Qanon is just an anonymous entity that shares information to help the public connect important dots concerning current issues the MSM refuses to research/cover,” she tweeted in February.

“QAnon followers are convinced they have access to secret knowledge about how the world really works,” said Travis View, a host of the QAnon Anonymous podcast which dissects and analyzes the sprawling conspiracy theory.

Because of this, View told LCRW, “in QAnon world, the most innocent actions by an ideological enemy are seen as secretly nefarious.”

“Admitting that the flour donation is benign wouldn't fit well with their dark, conspiratorial fantasies,” he said.
QAnon isn't the only right-wing extremist group Krabach engages with. On Martin Luther King Jr. Day this year, she was one of the few attendees at a Seattle "MAGA March Against Racism and Bigotry." The rally was organized by "Patriots of Washington," a group of far-right activists with ties to Patriot Prayer and the Proud Boys.

People on Twitter let Krabach have it and she backpedaled, claiming she wasn’t targeting antifa–she just wanted answers about supply chain issues from Bob’s Red Mill. As of this writing, the company hasn’t responded to her tweet.

“You’re mad at antifa for distributing four when your system crumbled,” an antifascist told Krabach on Twitter.

“Nope. I’m concerned that flour isn’t getting into our grocery stores when it’s obviously available through the right suppliers. This isn’t a charity problem, it’s a broken supply chain problem,” Krabach replied.

“Damn, if only there was group giving away flour for free,” another antifascist said. Krabach blocked them.

Incidentally, Krabach’s Twitter bio says “This is my personal Twitter, so yes, I CAN legally block you.”

Symbiosis, meanwhile, successfully distributed the flour and other supplies.

“Wow the flour and grains went fast today! We're all out now but we are so grateful for the opportunity to provide this to our community!” Symbiosis said of the giveaway on their Twitter account.

“And we, uh, do not think providing flour to our neighbors which would otherwise have been discarded is a sinister act...despite certain insinuations from right wing politicians in an entirely different state,” they added, ending the tweet with a ‘shrug’ emoji.