Sunday Afternoon at Denny's from Xavier Rotnofsky on Vimeo.


On September 22nd, Harim Uzziel, a minor figure in the Trump/far-right protest scene in Southern California, held a meetup at a Culver City Denny’s. It seemed like it’d be a boring event where a dozen or so Trump supporters ordered chicken tenders, heard speeches and learned how to register voters.


A group including John Turano, a.k.a Based/Cucked Spartan and Charles Brandon Recor, both far-right figures who regularly go to protests to brawl with people, and Antonio Foreman, a Unite the Right attendee with ties to the white nationalist media outlet The Red Elephants, stood outside the Denny’s to confront Uzziel.


Uzziel isn’t just some local Republican booster. He attended the April 15th, 2017 rally in Berkeley that turned into a massive brawl between militiamen, open white nationalists, Proud Boys and antifascists. He’s mingled for years with the extended West Coast right-wing protest scene that includes Proud Boys, conspiracy vloggers, militias and open white nationalists. He’s gone on conspiratorial rants against the Illuminati and was kicked off a flight after an unhinged rant. He later expressed in a since-deleted livestream that he was trying to distance himself from the openly white nationalist strain in the pro-Trump activist scene.


The conflict between Uzziel and his former colleagues is the subject of Sunday Afternoon at Denny’s, a short documentary by Xavier Rotnofsky. The film’s been well-received. Patton Oswalt called it ‘Amazing’ and it became a Vimeo Staff Pick. LCRW reached out to Rotnofsky this week to talk about the film and the art of documentary.


LCRW: Give us some background on you and your career as a filmmaker.


ROTNOFSKY: I wouldn’t say I have a career in filmmaking yet, but I write and produce as much as I can with friends. I’ve always been interested in documentary, and I hope to do more of it.


LCRW: What about documentaries appeals to you?


ROTNOFSKY: There’s so much drama in real life, so I love documentaries that explore that. I love weird, unscripted moments people post online like on Worldstar and Twitter.


ROTNOFSKY: I’m a big fan of Adam Curtis but he’s not really a slice-of-life director.


LCRW: How did you find Harim Uzziel and this story?


ROTNOFSKY: My friend sent me a screenshot of Harim’s Facebook event. My roommate and I decided to go to Denny’s for lunch and just see what would happen. We didn’t expect what went down.


LCRW: What initially drew you to it?


ROTNOFSKY: The venue. It’s such a strange and surreal setting for a MAGA meeting. The infighting between the MAGA groups made it even more surreal.


LCRW: What were your impressions of the MAGA crowd going in to filming?


ROTNOFSKY: Everyone just seemed so sad, desperate, and empty. Even the people outside.


LCRW: What kind of story did you initially think you’d be doing when you went to film Harim’s meeting that day? What did you expect would happen?


ROTNOFSKY: There weren’t really any expectations. We figured it would just be a MAGA meeting held in a Denny’s. We didn't know there would be so much conflict.


LCRW: Did you expect the people who showed up outside to be there?


LCRW: What was shooting that conflict like for you?


ROTNOFSKY: It felt a bit risky, but ultimately both groups were so concentrated on bothering each other, we were the least of their worries.


LCRW: The crowd that confronted Harim included Antonio Foreman who was at Unite the Right in Charlottesville and others who have incited violence and brawled with people at protests. Did you know anything about those people beforehand? What’s your reaction to learning more about who they are and what they’ve done now?


ROTNOFSKY: I knew about Antonio beforehand. He once came out in one of my videos from a few years ago. So I’ve had experience with him.


LCRW: What’s the reception to the film been like? Do you find people like antifascist activists who were familiar with the characters in your film beforehand reacted differently than the people who didn’t know who they are?


ROTNOFSKY: The reception has been wild. I did not expect such a positive reaction. I don’t think the reaction has been different between people who are familiar and people who aren’t. Though, antifascist activists understand more of the backstories.


LCRW: What’s next for you? Do you plan to explore right wing extremists further in your work?


ROTNOFSKY: I’m not sure what’s next. I have to figure that out. Yes, I would like to explore them further in my work.


LCRW: Are there any major lessons or messages or broader awareness you hope the audience takes away from your film?


ROTNOFSKY: I hope you get the vibe of what it felt like to be at Denny’s that day.


Rotnofsky’s work can be found here on his Vimeo page. Check out his film Wipe here. You can follow him on Twitter at @xrotnofsky.
at November 28, 2019 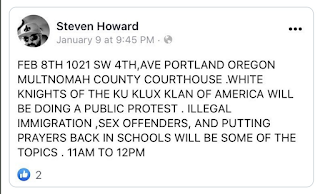